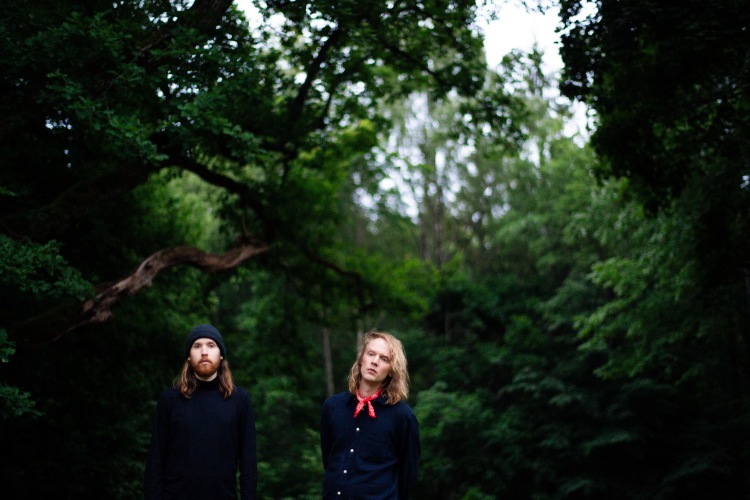 Something is happening to you once you set forth to travel the world. A part of you remains out there while a part of the world is following you back home. Born in the backwaters of Finland, NEØV have quickly become a premier Nordic indie export. After having spent most of their youth brooding in sleepy provincial towns, 2019 saw them boldly stepping into international light with their mesmerizing, groundbreaking third effort “Volant”. Brothers Anssi and Samuli Neuvonen found themselves leaving the land of the thousand lakes and traveling the world, constantly praised as one of the most talented acts coming out of Scandinavia.

Somewhere along the road, something must have happened to singer, guitarist and songwriter Anssi Neuvonen and his brother, drummer Samuli. After having used the remote vastness that is the Finnish countryside for lengthy writing sessions in solitude, gracing their music with a unique sense of melancholy and loss, their ever-growing audience witnessed them opening up bit by bit, leaving behind home, and finally setting out into what has now become a very promising international career – a career that is reaching new heights with their spellbinding fourth record “Picture of a Good Life”, the epitome of a Nordic indie symphony.

It’s only logical. In the wake of their third record “Volant”, released in 2019, they captivated and enthralled a global audience with their warm, laconic, northern indie sound, a sonic world drenched in ethereal melancholy, loneliness and longing. They toured Europe, they played ecstatically reviewed gigs in Prague, Berlin, at SPOT Festival in Denmark and prestigious Reeperbahn Festival in Hamburg, they even made it to German TV. Suddenly, the recluses from up north were all over the place – and Finland’s best kept indie secret was a secret no longer.

All this came at a price, though. “The whole ‘Volant’ cycle was intensive, and we went places we had never been before. One of the most rewarding things was to notice that our music touches the audience in several countries. But these rewards didn’t come for free: they came with pressure, low points and a need to reflect how we operate as a band,” Anssi Neuvonen honestly reflects. “This also meant that nowadays NEØV is just the two of us, and we’re getting ready for the next tour with a new live line-up.”

This time around, NEØV are venturing even further, going where they have never ventured before. After recording “Volant” all by themselves in a remote hermitage buried deep within the backwoods of Finland, they switched location for vibrant harbor metropolis Hamburg, comfortably snuggling up in Clouds Hill’s very own recording facilities, a place renowned near and far for its impeccable acoustics, urban surroundings and excellent sound. “The recording session was probably the highlight experience of our career so far,” Neuvonen raves. “Clouds Hill has one of the most impressive analogue studios in Europe, and its characteristic sound is present on the album. I also think that Hamburg makes you a bit restless. There’s a very nice pulse to the city, and I feel some of it ended up on the album, too.”

This by-now legendary studio allowed the actual recording process to be fast and intuitive. “We spent seven days there, and I recorded the vocals afterwards in Finland.” Working with in-house recording and mixing engineer Sebastian Muxfeldt (Teenage Fanclub, Elbow, Albert Hammond Jr.), NEØV found their predestined partner in crime. “This was a much-needed experience after fooling around in our home studio for so long with ‘Volant’,” the frontman says and laughs: “It also allowed me to be an old-school record producer. You know, with a scarf, abstract language and hand signals, not worrying about the technical stuff too much.”

It’s apparent how much good this did to “Picture of a Good Life”. While still retaining their aura of something irretrievably lost, their fourth full-length sees NEØV enter new territories. “With ‘Volant’, the recording process was about perfecting things,” Neuvonen says. “But that’s of course only one way to do things. With ‘Picture of a Good Life’, the recording process was about surrendering to the moment and doing the best with what we had. It’s our very own work of improvisation.”

Even though they have always aimed for an international sound, only recent years showed the duo really opening up in both music and attitude, fully embracing their origin yet aiming for grander things than just being that mournful Finnish indie band from the woods. “Most of our influences have always been international. But the fact that we reside in Finland definitely adds something to our music. I consider it as a strength that we’re not after the latest international trends.” Their fourth record indeed is a far cry from any kind of trend worship. Take alone the epic and wallowing album opener “Marathon”, also serving as first single. A seven minute epitome of gloomy beauty, held together by only four lyric lines. The journey continues via psychedelically drenched “Island”, the lustfully dark indie rock of “Burnt My Fingers” and the eclectic “Wild Birds”, a tour de force through German electro and Italo pop (yes!), further on to their heartbreaking Nordic noir ballad “Loners”, the Bowie-meets-Radiohead clash that is “Patchwork” and, ultimately, the title track, Neuvonen’s favourite NEØV song ever. In short: “Picture of a Good Life” comes as a versatile, furious, ecstatic bang of an album after the meditative and introspective brooding that was “Volant”.

“I wanted to make a louder and more guitar-driven record,” the composer nods. “Maybe we went to that direction because that kind of songs work best at concerts and we wanted to keep that feeling alive and create something out of it.” That being said, however, melancholy and solitude still come as central elements to their gloomy sound – crying Fender Stratocaster and dynamic drumming nonetheless. “It’s just what we do,” he shrugs. “Is it because of our personalities? Or just because of our musical and cultural taste? I guess we have not thought about it too much, we’ve just created music we like. But I think that Samuli and I are much more interested in art and music that’s reflecting human difficulties than art and music that’s actually trying to be some kind of a picture of a good life.”

Yet this is exactly the title they bestowed upon their latest effort. “All of us are surrounded by pictures of good lives, and we constantly present pictures of our own lives. But are we really living our lives or are we presenting ourselves in a picture of how we wish our lives to be?,” Neuvonen asks. “The album deals with this in a context of self-criticism and in a broader context as well. Chasing a picture of a good life is a timeless human endeavor and a great paradox.” NEØV have opened up. The two brothers have embraced life, sampled the highs and lows of an international career. They have stepped out into the world only to return to themselves. Between the light of the twinkling stars above the Finnish wilderness and the cities that never sleep, they created “Picture of a Good Life”, an album both daring and enchanting. A ceremony of opposites, started in solitude and completed in urban unison. A Nordic indie symphony for the restless, the driven and the dreamers. Only a bit more distorted this time.